The Absolutely True Science of Nerds is a satirical series of three, totally scientific, lectures on how to become the Batman, the technology of Star Wars vs. Star Trek, and Godzilla biology. With music, special guests and Q&As. And sporadic tap dancing.

Please note: This material will be on the final. 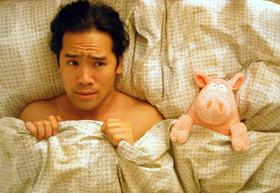 The Absolutely True Science of Nerds

Shyaporn Theerakulstit is an actor, writer, lecturer, new media content creator and D-List YouTuber, where he posts videos about drug addicted Easter bunnies, Godzilla biology, unemployed Superfriends and flying kittens. You can see examples of his internet whimsy at YouTube.com/Shyaporn.

A portion of The Absolutely True Science Of Nerds, "Godzilla: History, Biology and Behavior of Hyper-evolved Theropod Kaiju," was first presented for the Nerd Nite lecture series at Galapagos Art Space in Brooklyn, New York in 2009.

It has since been seen at Global Nerd Nite, the 92nd Street Y, TEDx, C2E2 in Chicago, Nerd Nite Toronto, and as the closing presentation at the Smithsonian Institution's 2014 Future Is Here Festival.

Most recently, The Absolutely True Science of Nerds just completed a successful and critically-acclaimed run at the 2015 New York International Fringe Festival, at DROM in NYC.